Available for purchase direct from Anthony Digmann (Always FREE Shipping!) or from Amazon as paperback or kindle here! 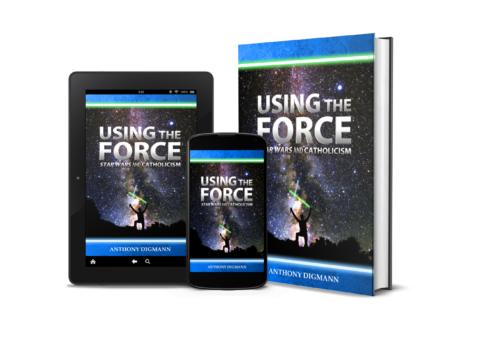 Description:Using the Force: Star Wars and Catholicism offers an incredible opportunity to fuse these two cultural monoliths in a fun and productive way. Star Wars fans, youth, parents, ministers, teachers, and others will find this book an invaluable resource to illustrate the connections between the mythology of the Star Wars franchise and the eternal truths and richness of Catholicism. By exploring Star Wars through a Catholic lens, we may rediscover elements of our faith from a new perspective and share them more effectively with an increasingly post-Christian culture.

Endorsement from Mark Hart: “In Using the Force: Star Wars and Catholicism, Digmann combines two of my favorite topics–the Catholic faith and the characters and events that unfolded ‘a long time ago . . . in a galaxy far, far away.’

As a Star Wars nerd, I found this book intriguing–a thoughtful and well-researched summation of the various episodes and (even the lesser known) storylines. As a Catholic Catechist and ‘Bible Geek’ I found the book edifying–an impressive and creative way in which to unpack the faith to a generation and cross-section who might not otherwise discern the truly dogmatic ‘trees’ within Endor’s forest.

If the Star Wars fan in your life (or in the mirror) loves the Catholic faith as much as the not-so-holy Clone Wars and galactic battle between Empire and Rebellion, this is soon to be a surefire favorite on their shelf.”

“Using the Force: Star Wars and Catholicism is not only a labor of love, it is a meticulously researched sourcebook for anyone who might find themselves in a position to catechize the Star Wars generations, or especially to evangelize youth. Writing as a fan, rather than a critic, allows Digmann to mine the Star Wars universe for connections to Christianity in general, and Catholicism in particular; connections that faithful Catholics will definitely appreciate. This is a book only a passionate fan could have written, and reading it made me want to watch the films all over again!”

Author Bio: Anthony Digmann serves the Catholic Church as a speaker, author, and educator. He has appeared internationally on Catholic television and radio, such as EWTN and Radio Maria. Anthony has a MA in Theology and has served professionally in Catholic schools, parish ministries, and on councils of the Archdiocese of Dubuque since 2006.

There are no reviews yet.

Be the first to review “Using the Force: Star Wars and Catholicism – Book” Cancel reply